Home › How To And Tips › Dead Spots in Junipers 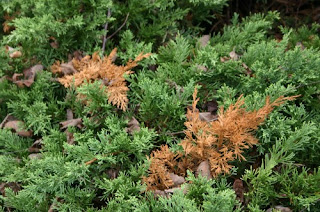 
Dead spots in junipers can be the outcome of a blight disease. Kabatina tip blight, caused by Kabatina juniperi, impacts junipers in late winter during February and March. Tips of branches very first turn dull green and then progress to yellow or red. By May or June the brown tips fall off the plant. Phomopsis tip blight is caused by Phomopsis juniperovora, which impacts the terminal four to 6 inches of branches during the growth time period from mid-April to September. Foliage impacted by Phomopsis tip blight turns red or brown and then gray. The blight can continue to infect new branches all through the season of growth, and can result in the death of the juniper.


Prevent tip blight disease through choice of resistant varieties and mindful cultural practices. Steer clear of mechanical damage to junipers, which provides openings for fungal spores. Fertilize to keep plants healthy, but do not over-fertilize, which leads to rapid, succulent growth that is a lot more susceptible to disease organisms. Prune lightly to inspire good air circulation, but do not over-prune. Water plants in early morning and remove diseased branch tips during dry climate in early morning. Sanitize pruning clippers with a home disinfectant -- such as a pine oil cleanser or home bleach, making use of one component pine oil or bleach to three components water -- to stay away from spread of fungal spores.


When you prune or shear junipers heavily, excess foliage grows on the exterior, shading out the interior foliage. More than time, with additional pruning, the dead interior foliage is exposed. An over-pruned juniper can't revive, as new growth can not be stimulated on bare branches. Prune only for subtle shaping or to remove diseased or dead wood.