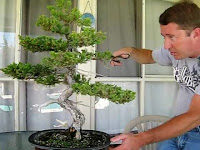 BONSAI, according to Lito Alansolon, current president of the Cebu Bonsai Society, is the Japanese art of growing trees on a tray. And the beautiful bonsai specimen one sees in an exhibit or in a bonsai grower’s garden is a result of hard work. Alansolon said he became fascinated with bonsai when he visited exhibits in Metro Manila where he was then assigned as a regional manager of a pharmaceutical company. Inspired by the exhibits—“looking at a big tree in miniature form—he took up bonsai cultivation when he retired in 1999. He says it’s not easy to come up with a beautiful bonsai plant. It can take several years to finally realize one’s concept of the bonsai one has started to grow and it takes a lot of work. To make a bonsai, he explained, one can start several ways. One is through cuttings, or marcotting or layering. Or one can start from a seed. But the easiest, though perhaps not as self-satisfying, is to go to bonsai nurseries which, he says, “have a variety of ready material according to size; and then you replant it. It’s easier to create a bonsai from a nursery than from the cuttings or seeds.” The hard part comes when one already has the bonsai material. One chooses the tray or container where one plants the bonsai material. Then one has to nurture the plant. For cutting and marcotting, it may take three years to finally form it as a bonsai. From seed, it can take up to 12 years. The plant has to be carefully watered and the potting medium changed every three to five years. To shape the bonsai to one’s concept of its mature tree, one needs to bend the branches using aluminum or copper wire, or one might clip away an unwanted twig in order to shape the tree to one’s idea of it in mature form, be it in the form like the broom or umbrella type, the informal or formal upright, or the cascade, or whatever else one may fancy. These days, now that he is much older than when he retired, Alansolon says he is into an even smaller form of bonsai, a miniature bonsai: “Shohin size bonsai.” It is bonsai that can be carried in the palm of one’s hand, and it must not be more than 10 inches tall. The biggest of his old bonsai needs to be carried by four people if it is to be transported but his shohin bonsai is easily portable. He says, though, the care is the same. He uses “the same technique, the same way of caring for them except when you change potting medium. For shohin, one changes the potting medium once every year while for the big bonsai, the potting medium is changed every three to five years. Making a bonsai teaches me patience.” It also gives Alansolon great pleasure to contemplate the things of beauty he, in effect, has created. This is why he, and many more hobbyists and enthusiasts in Cebu, stays “hooked” on bonsai.